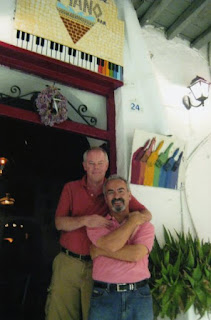 The news here in Greece is heavily focused on how much the country has changed over the last thirty years. All you hear is âthirty yearsâ of this, âthirty yearsâ of that. So, I decided that as a personal change of pace Iâd ask my friend Jody Duncan, who with his partner, Nikos Hristodulakis, own the Montparnasse Piano Bar, a Mykonos institution into its thirtieth year, to give me his thoughts on what those years have meant to him. And yes, Jodyâs time was spent behind bars, something many Greeks argue a lot more should experience if the country is to change its thirty-year course. But thatâs for another time, for now hereâs Jody.
I’ve been thinking about how to approach this significant thirtieth season on Mykonos. Thatâs not to say the prior twenty-nine were insignificant, but when I try to put down all the memories rushing through my head, I donât know where to begin.
Should I give you another funny tale of a frenzied evening in The Piano Bar? Maybe the one from long ago about an extremely famous and overly demanding clothing designer from France who thought that waiting for a table during a busy evening was beneath him? No, he still comes in. I better forget that story. Or the enthusiastic Irish lady whose husband ran off for the evening with another man? Hmmm, I think Iâll tell you that one next time.
Perhaps youâd like to hear about the first time Petula Clark sang in the bar, much to the delight of everyone here? Oh that was a great night. The crowd convinced her to sing and right after she finished she came over to Nikos and said that sadly now she had to leave because her âcover was blown.â Nikos smiled and calmly told her, âMy dear, your cover was blown long before you ever arrived at our bar.â 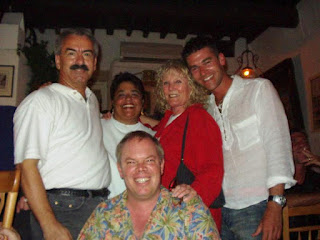 He carefully explained that passengers had recognized her on the flight to Mykonos, and from the moment her plane landed the central topic of conversation was âWhen would Petula Clark show up at Montparnasse to hopefully sing a chorus or two of Downtown.â She burst out laughing, walked back to the microphone and did just that to a wildly appreciative audience. Sheâs returned to the island many times, always obliging us and her audience with that same sort of gracious performance. We still keep our eyes on the door for when the lovely Pet will come through it again. 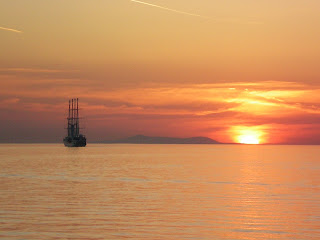 Then there are all those lovely sunsets, almost four thousand, each one slightly different from the others. I canât begin to count all the times over the years that someone has asked me, “Do you know you live in paradise”? My response is always the same: âYes, I know.â Though I must admit there have been times where Iâve taken sunsets for granted, only to be stopped in my tracks by a nearly perfect one. 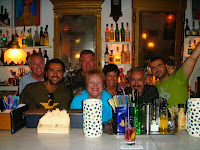 Of course, Iâm overwhelmed with memories of all the talent thatâs appeared behind our piano and microphones, but there are way too many names and faces to even begin mentioning them all. Iâll just stick to naming whoâs coming this year: Bobby Peaco, Kathy “Babe” Robinson, Phyllis Pastore, Mark Hartman, and Kelly Howe. And one whoâs not: our dear friend David Dyer. Alas (for us), heâs serving this summer as associate conductor for the national tour of Peter Pan, starring Cathy Rigby. But heâll be back in 2013. So, how did he get that job? Through the magic of Montparnasse: one of our long time customers hired him. A tale in and of itself, but one I shall not tell.
At least not now.
Iâll save it for when I have to find something to say in another thirty years, but for now I think Iâll just end it here.

Iâll leave any punning observations on your choice of endings to others, Jody, as Iâm mercifully off in Munich at the moment and relatively incommunicado.
JeffâSaturday