Categories:
Archives:
Meta:
February 2023
05/14/11
A Twisted Tale from the Piano Bar
Filed under: Tales of Montparnasse the Piano Bar of Mykonos
Posted by: Nikos @ 6:25 pm

A Twisted Tale from the Piano Bar 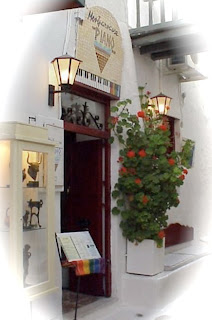 In case you ever wondered about the risks run to oneâs mental state of spending virtually every waking hour during a six-month frenzied tourist season chatting up customers from behind the bar of a La Cage aux Folles-style cabaret, this story is for you. It comes straight from Jody Duncan who, together with Nikos Hristodulakis, owns Montparnasse Piano Bar on the Aegean Greek island of Mykonos. Jodyâs tale is not for the politically correct. In fact, to call it âwarpedâ or ânutsâ would be far too kind. You are hereby warned to put aside any notions of common human decency for the maestro of the sicko genre has a story to tell. Take it away, my friendâ¦and while youâre at it do so as far away from me as possible, sâil vous plait.

Thank you for that thoughtful introduction. Okay, I admit that this story involves my devilish mind at work but one of our waiters from back around the turn of the century put me up to it. The Piano Bar and Malcolm were a match made in show tune heaven. We featured Broadway and West End tunes and Malcolm loved the shows.

One night during a lull in the action Malcolm was standing by the bar lamenting on the state of Broadway musical theater. âStop with the complaining already,â I said. âLetâs put our heads together and come up with a better idea.â And sure enough, in a matter of minutes we hit upon an extravaganza that could change Broadway forever: a musical based on the life of the Schappell twins, born Lori and Dori. 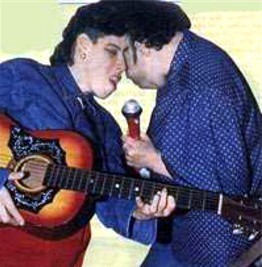 For those of you who do not know, they are sisters conjoined at the head and facing in different directions. Before you pickup those pitchforks and start coming after me at the bar let me give you a bit of background on the twins. They were born in 1961 in Reading, Pennsylvania. When a court determined that their parents were unable to care for them they were placed in a home for the severely mentally disabled, though neither had that disability, and remained there until twenty-four when freed through the efforts of the wife of the then governor of Pennsylvania.

The sisters went on to college and Dori, who always wanted to be a country western singer, legally changed her name to Reba to honor her idol, Reba McIntyre. In 1997 the new Reba won the L.A. music award for best new country artist. Reba also designed specialized equipment for persons with disabilities, including her own wheelchair, and was a trophy-winning bowler. She now prefers to be called George and was introduced as such in 2007 when the sisters participated in the grand opening of âRipleyâs Believe It or Not! Odditoriumâ in New York Cityâs Times Square.
Lori, the more outspoken of the sisters, works part time in a hospital laundryâ¦but takes time off to attend her sisterâs concerts. They are advocates for what the handicapped can achieve and are widely interviewed.
Yes, the Schappell sisters are extraordinary people, persons to genuinely admire, but I promise you neither Malcolm nor I had any of that in mind while we flirted with songs for our musical masterpieceâand eternal damnation for the effort.
Hereâs just a sampling of our proposed repertoire: 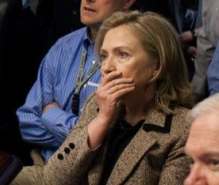 You Go to My Head (âAnd you linger like a haunting refrain, and I find you spinning round in my brain.â).
Can’t Take My Eyes Off Of You (âYouâre just too good to be trueâ¦Youâd be like Heaven to touch.â).
Miss Celieâs Blues (Sister), from the film The Color Purple (âSister, you’ve been on my mind, sister, we’re two of a kind, so, sister, I’m keepin’ my eye on you.â).
Together (âWherever we go, whatever we do, we’re gonna go through it together.â).

Iâm sure you get the idea, and by now are eying those pitchforks. But donât you agree that sometimes the devil just wonât let you let go of whatever crazy ideaâs got a hold of you? And the devil had me this time. Again.
The more Malcolm and I bantered back and forth the more we cried out in wicked, perverted joy over this evil, musical stroke of genius. Then I came up with the number for the finale destined to win us a Tony: You’ll Never Walk Alone!
Or perhaps the show should close with Georgeâs performance (as Reba) singing Fear of Being Alone over the credits of the comedy Stuck on You starring Matt Damon and Greg Kinnear as conjoined twins?

Why do I sense I should just stop right here and get on to this monthâs recipe for one of our world famous cocktails? I guess because you deserve a bit of good taste after enduring such a large dose of the other.
Hereâs our Double Espresso Martini, guaranteed to both slap you in the face and make you turn the other cheek. In a cocktail shaker half filled with ice, add 1 Â½ ounces vodka, Â½ ounce espresso coffee liqueur, Â¼ ounce creme de cocoa, Â½ ounce Kahlua coffee liqueur, one shot espresso, one splash of simple syrup, and shake very well. Strain into a chilled martini glass and garnish with a cinnamon stick.
Enjoy!

Thank you, Jody. I think.